Exciting opportunities are promoted for children and young people to expand their horizons through involvement in creative art activities ranging from fine art to music or drama. Examples are: 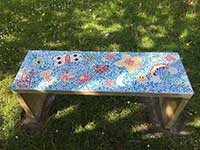 In early 2019 Salisbury based artist Sif Wolthers led a series of mosaic workshops with youth groups at the Friary Community Centre thanks to funding received from Sarum Arts Society.

Young people from Friary After School Club, Friary Youth Club and local residents designed and created a mosaic bench for their community garden.

A full evaluation report on the project can be seen here » 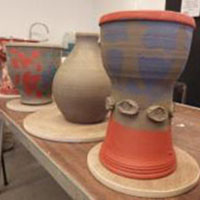 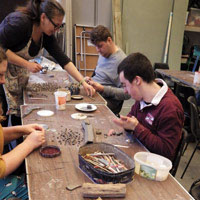 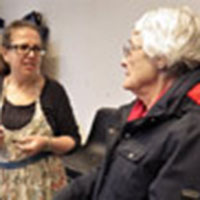 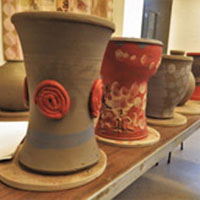 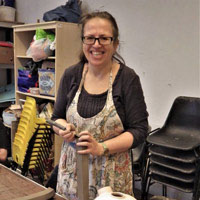 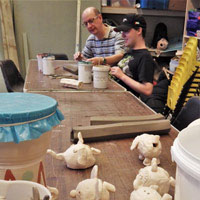 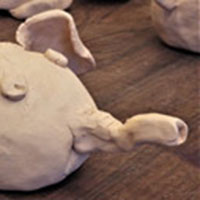 The Arts Society Sarum, in conjunction with Zone Club, a regular music group who meet monthly at the Salisbury Arts Centre, are helping to fund a series of three workshops at which members will construct a variety of musical instruments. Modelled in clay these instruments can be shaken, blown or hit percussively and give members a wonderful opportunity to experience a fully integrated cross arts project.

Run by resident Arts Centre potter Mirka Golden Hann it can be seen from the attached pictures that individuals are not only having fun but producing impressive results!

The results of the workshops will be heard at a concert performance later in January 2018.

Following on from this the organisers are planning to produce a resource pack that will be available to schools and educational establishments so that the activity can be replicated and provide many others the benefits of musical creativity.

At a specially arranged event at the 2016 Salisbury Festival 22 young carers, aged between 14and 18, took part in shadow puppet design workshops led by professional artists from ‘Two Destination Language’. 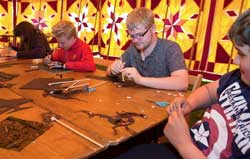 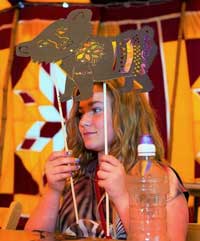 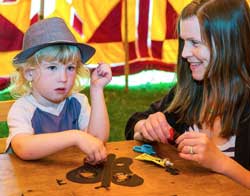 Sarum Arts Society, together with Salisbury Festival and Youth action Wiltshire helped fund and organise the event. The overall project consisted of four workshop days over the Easter holidays and culminated on the 29th May at the ‘Young mythmakers‘ standalone event at the festival. The impressively designed and created animated puppets, including a particularly evocative ‘Donald Trump’, were displayed in a specially constructed shadow theatre in a large tent on the Cathedral lawns.

Over 300 children, parents and families who visited the tent saw for themselves the impressive results from the project. They also had the opportunity to create their own puppets in an on-site workshop, supervised and instructed by young carers who could pass on and demonstrate some of their acquired new skills in drawing, paper cutting, puppet design and manipulation.

The young carers’ puppets were framed for them at the end of the day so that they could take them home as a memento of the project. In addition, and a first for Festival, the organisers were able to enter the young carers for an Arts Award qualification and 19 of them were successful in gaining an Arts Award (awarded by Trinity College, London).

Young carers usually have few opportunities to take part in creative out-of-school activities. In Salisbury, Sarum Arts Society has played a key part in helping to provide this very thing by helping to fund an innovative creative showcase project.

Working closely with The Salisbury Arts Festival, as part sponsor with Youth Action Wiltshire, Sarum Arts Society was particularly enthusiastic to be part of an initiative that enabled young carers to express and develop their talents, creativity and confidence in a relaxed and supportive atmosphere.

The showcase provided opportunities to young people from across Wiltshire to work on two associated creative projects. Professional dance artists and film makers, Being Frank Physical Theatre, allowed youngsters to both participate in, and then create a short dance film. This film complemented the Listen to Us music project that saw young carers spend five days working with musicians from Bath Philharmonia’s ‘Music in Action’ team to create their own original compositions.

A packed audience at Salisbury Arts Centre on Wednesday 27 th May viewed the excellently produced dance film and heard well played, beautiful music and, as a result, were greatly moved at the astonishing results produced by this team of young carers. And the youngsters weren’t allowed to leave the venue without an encore, followed by rapturous acclaim!

This outstandingly successful project will hopefully be followed by further involvement in future young carers schemes, working in partnership with The Salisbury International Arts Festival.


The following projects are some of those previously undertaken by Sarum Arts Society:

2014 - Empowering youth culture at The Unit

A dramatic and dynamic wall mural showing a montage of young peoples’ interests is a key element in the refurbishment and re-launch of a youth centre project in central Salisbury.

This venture, a joint project between 60 Salisbury young people, a local artist Sean Slater and a partnership of other local organisations, including Sarum Arts Society as a key member, has just been completed.

Simon Morris, Engagement Manager of Salisbury Arts Centre and a joint organiser of the project commented ‘ This project was a great opportunity for young people to contribute and be involved in something that will become part of their lives when they use the facility. We are very grateful to all the partner organisations, especially The Arts Society, that have made this happen’

THE UNIT, due for official re-launch in January 2015 is to be a focus and vibrant city centre hub for Salisbury young people. It will seek to offer involvement in creative and entertainment projects, community work and to help individuals find and develop possible career and employment opportunities. Other organisations involved in sponsoring this project included Radian Housing, Phoenix Women's Group and Salisbury City Council.

In 2013 Sarum Arts Society and Wylye Valley Arts Society combined their resources to enable a group of young students with severe learning difficulties from Exeter House School, Salisbury to create a mosaic for the school's courtyard garden. Members from both societies gave their time as 'extra pairs of hands' and really enjoyed themselves, seeing the students' delight as they took part in the various activities. An attractive and colourful mosaic panel expressing the theme 'Calm, Reflection and Peace' is now to be enjoyed by students, staff and visitors to the school's new garden space. 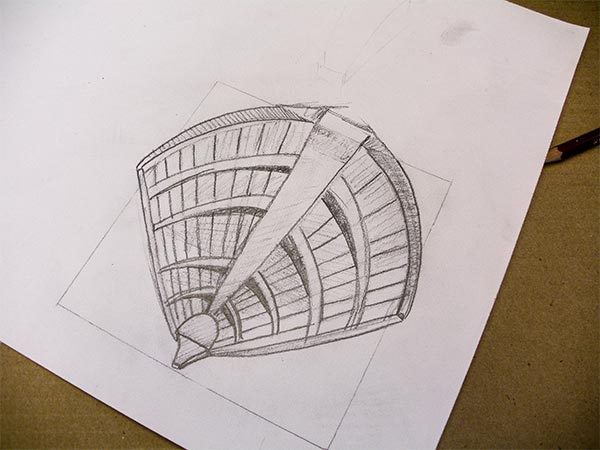 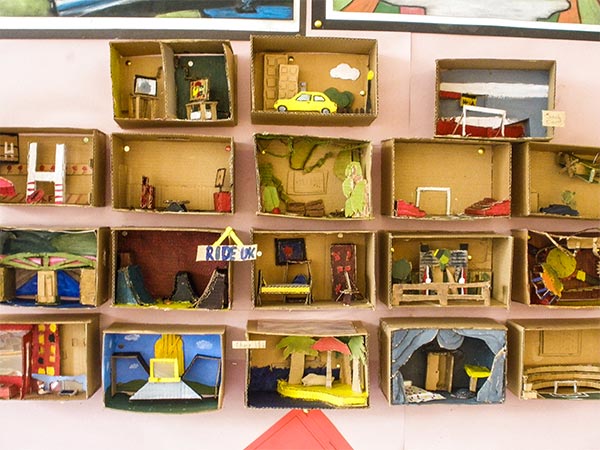 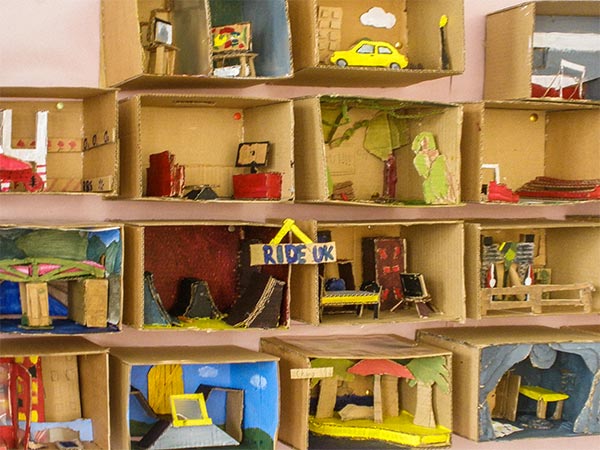 In October two groups of GCSE level pupils at Wyvern College benefitted from one-day workshops given by KATHERINA RADEVA, a freelance artist/teacher with a special interest in stage-set theatre design. Apart from developing practical skills and introducing new techniques and methods, the workshops increased pupils' understanding of work-related learning. 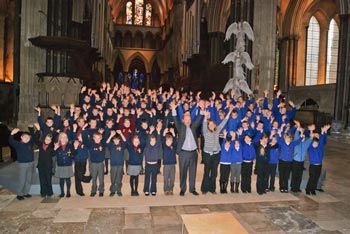 Music teachers from Salisbury Cathedral School were sponsored to train pupils at two state primary schools in the area (with no musical tradition) to enable them to perform a concert with the Cathedral Choir in Salisbury Cathedral. The children's enthusiasm was a joy to behold, and it is hoped that the event will lead to the creation of a permanent choir at the schools.