Over 2,000 hours of painstaking work by The Arts Society SARUM has led to the completion of a comprehensive church record that formally records contents, artefacts and features of a local parish church. This officially recognised record of St John the Baptist, Bishopstone, includes photographs, notes and pen and ink drawings that collectively provide a complete picture of the church furnishings and assets, well over 400 separate items!

After presenting a specially bound volume of the record to the church other copies will reside in the County record office at Chippenham, Historic England, The Church Care library in Westminster and The Victoria and Albert Museum. As well as providing an invaluable resource for archivists and academics the document is useful for insurance purposes, as the police can use the accurate descriptions and photos to identify stolen artefacts.

The Arts Society SARUM Church recording team consisted of 13 specialist recorders, including a photographer and an illustrator and met twice a week over the last 5 years (apart from cold winter months when research took place at the County Record Office).

St John’s, Bishopstone was built in the 13th century and has some beautiful stonework carvings, interesting woodwork and a large memorial monument by Pugin for the Reverend George Montgomery, who was a relative of the Earls of Pembroke.

An outstanding investigative success was to identify a large 17th century memorial in the North Transept. With extensive ‘sleuthing’ he was revealed as the Rector Abraham Conham. By chance in our catalogue numbering he was 007, not so secret anymore!

Church sleuths more than a match for 007 - major breakthrough 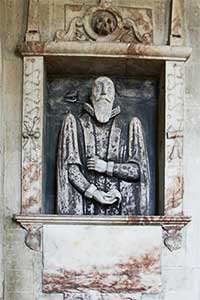 The Sarum DFAS church recording team have made a major breakthrough in discovering the identity of a mystery figure in St John The Baptist Church, Bishopstone, near Salisbury, in Wiltshire.

Affectionately known by his church recording file number ‘007’ the name of the individual shown on an impressive wall monument has remained unknown for countless generations. Now tenacious and diligent work by the team has solved the puzzle.

Important clues were a single date shown on the otherwise illegible memorial, 1612, the ruff shown around his neck that made him a religious figure and the symbolic images also shown with his figure, a bird and serpent, connected directly with his family’s armorial identity, as confirmed by a leading Heraldry consultant.

The team then linked him with the Roll of Rectors in the church and Abraham Conham was rector of St John The Baptist 1584-1612. Initially he had been discounted as being a Rector as he appeared to be a lawyer and too wealthy for the clergy!

Further evidence confirmed that his widow, Hester Conham, had later moved to Durrington, with her daughter who in turn had married Edward Poore at that location. In the chancel at All Saints’ Durrington there is a memorial to Hester Conham, also showing the same bird standing on a serpent; again the identical elements as found on the Conham family arms.

So, the mystery man is indeed Abraham Conham who was also a Prebendary at Salisbury, Lincoln and Wells cathedrals as well as Rector at Gussage St Michael. We suspect that did not leave him a great deal of time to devote to pastoral care at Bishopstone.

The Sarum DFAS Church recording team is still occupied in its task to catalogue and collate all of Church fabric, artefacts and possessions. The items are divided into 9 sections - Memorials, Metalwork, Stonework, Woodwork, Textiles, Paintings, Windows, Library, Miscellaneous, and they are all enhanced with photographs and line drawings.

When the Record is finally edited, it will be collated, published and presented to the Church. Further illustrated copies are issued to the V&A Museum, Historic England, the Churchcare Library and the Wiltshire County Record Office. The Church’s copy is invaluable for insurance purposes as a comprehensive inventory of all the items within the building.

Article in the Salisbury Journal » 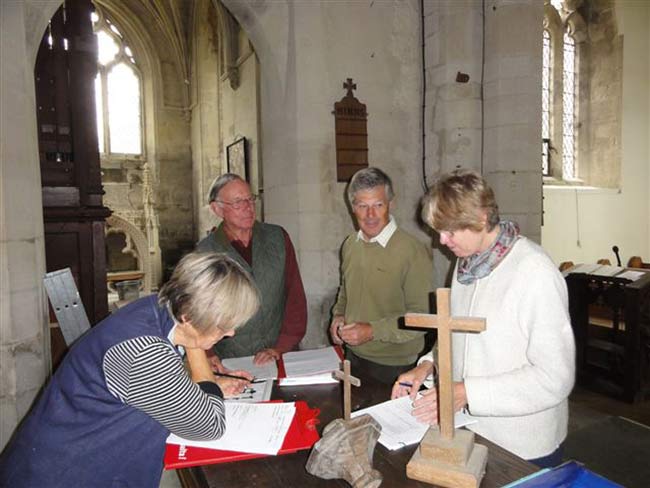 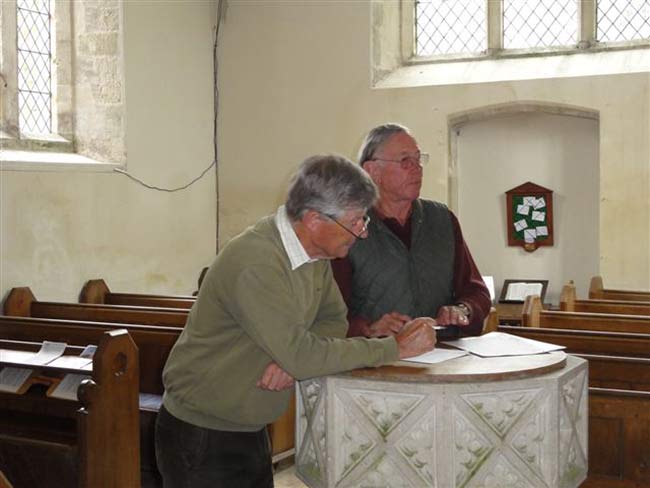 Studying the north door behind the font 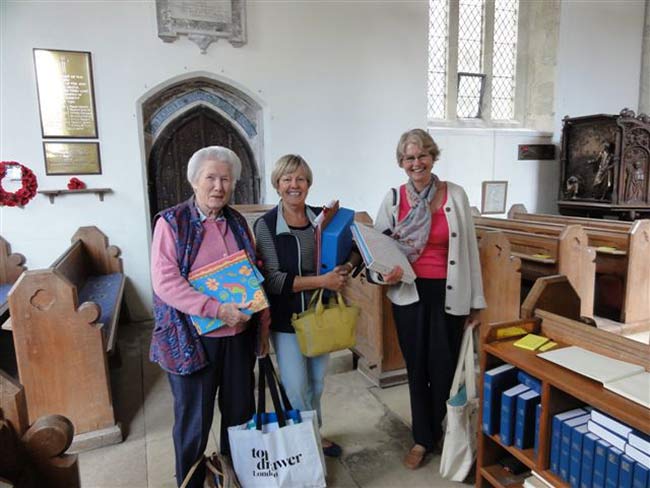 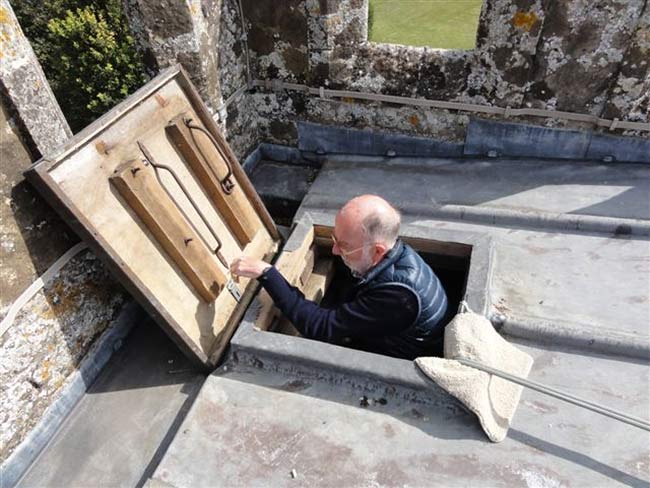 Out on the roof 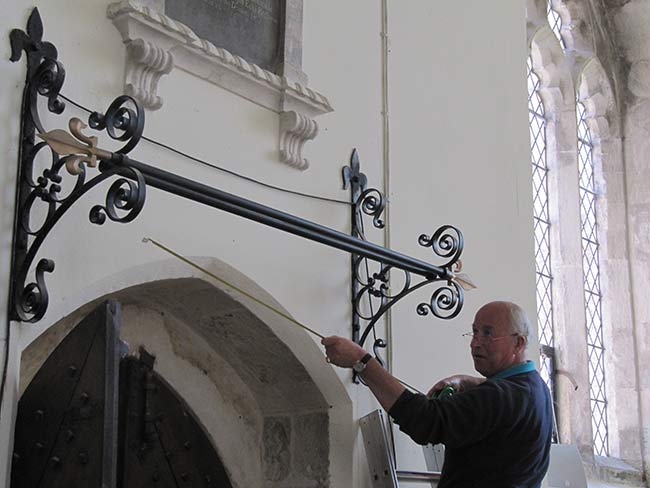 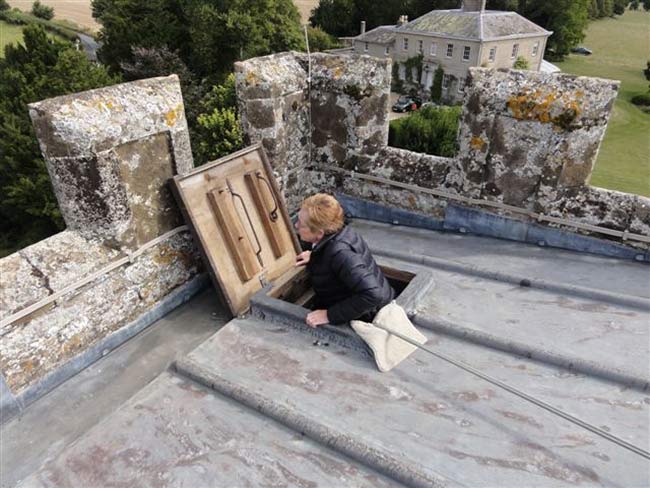 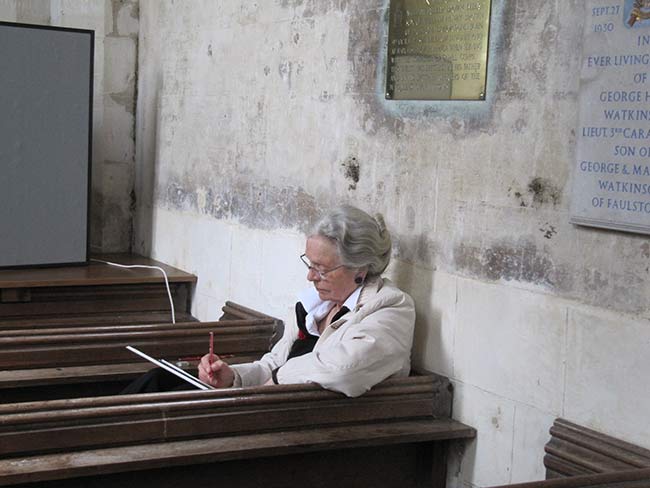 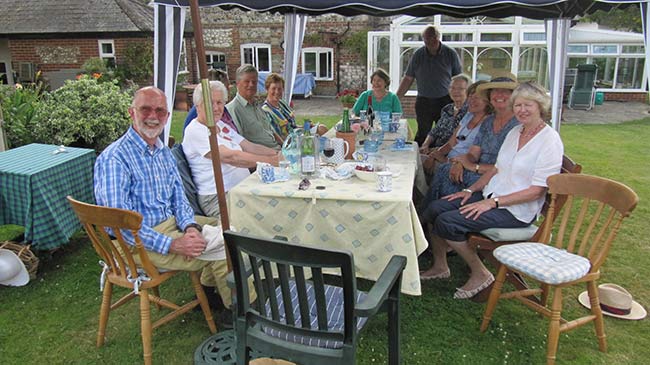 Recording in the Church